United Nations are in New York City making the world a better place! 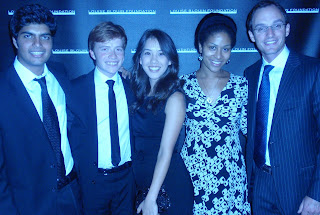 Last night I had a life changing time at the Louise Blouin Foundation (LBF) Awards Ceremony honoring leaders from around the world who have demonstrated exceptional creative achievement. The United Nations General Assembly is happening right now in New York City, and a lot of needed debates are happening. The UN really has the platform to heal a lot of wounds in this world, and I am hopeful that they will get more aggressive in doing so. At the LBF gala, Former Prime Minister Shaheed Mohtarma Benazir Bhutto, Prime Minister of Finland Matti Vanhanen, and Industrial designer Bruce Mau were honored. Bhutto, who was assassinated on Dec. 27, 2007, “was concerned with not only the clash of civilizations between East and West but within Islam itself. She fought for democracy, human rights, and the role of women in society, as well as respect for religion, technology, and modernity”. She is a martyr, and knew that returning to her homeland could cost her her life, but she felt the needs of her people were more important, and she fearlessly did so much for her community. Her husband accepted the award for her, and we were able to meet him, as well as many people from different countries. It was very inspirational to be in a room with so many different cultures, all wanting the world to be a better place. I interviewed Jasmine Plummer, who works for the Louise Blouin Foundation (see live interview below). I know a lot of people who work for the UN, and I am considering doing some volunteer work for them. There’s a big world out there, and we all need to come together and save this world before we ruin it anymore then we have.
Posted by Ashley and New York at 3:24 PM