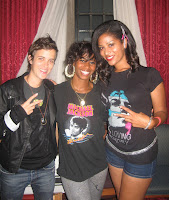 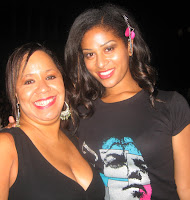 On Sunday, September 13, MTV held it's Video Music Awards. I went to one of the after parties, hosted by In Touch Magazine. It was at St Bart's Church. That's right, a party was actually held at a church, which was actually a very liberating experience! In the Bible it says its wrong to drink and let loose in a church like everyone was, but I think spirituality should totally be about celebration! Church should not be about judgments and condemning, it should be about living life, honoring artwork and making music! So I did not feel guilty that I had my go go shorts on and drinking champagne! My heart was in in the right place, and that's all that's matters! DJ Sam Ronson was the DJ, followed by her brother, Mark Ronson. I saw Sam backstage, with Santigold (who performed at the party). We three took a pic together, after which Sam said I was the only person she smiled for in a picture. Awww...so sweet. Keep on smiling Sam, you have such an adorable smile!I ran into a few NYC acquaintances from the past, which was perfect, for in this town, one needs friends!
Posted by Ashley and New York at 2:51 AM