Chris Brown Fails To Redeem Himself, Rihanna Keeps On Shining! 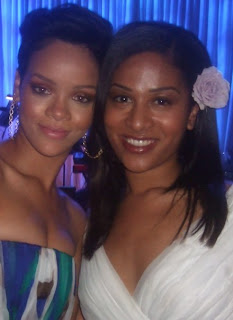 Chris Brown has failed to redeem himself on his interview with Larry King this week (not that an interview on TV could do that anyways, it has to genuinely come from the heart), which was obviously a last effort attempt to save his plundering career and endorsements. He downplayed the magnitude of his incident, and even went as far as to say that the media is “blowing it out of proportion” and insulted blog land for expressing their disappointment in his abusive actions. Newsflash Chris, the severity of what you did was a big deal, you did'nt just push or slap (which would still be horrid), you were repetitive and damaging in your violent blows to a young woman who was “physically” weaker then you (we all saw the picture and read the report!). She may be smaller then you in size, but now we all see she is bigger then you in self-esteem and expression. He sounded so arrogant in the interview, which is the type of attitude that probably led him to think it was ok to hit a woman in the first place. Anytime a man hits a woman, it’s just pathetic! Some abusive men think it asserts their “power” when they brutally attack a woman, however, it takes real power to be gentle, and in control of one’s self. Only a weak and immature man would ever disrespect the feminine in such an aggressive way that Brown did. Also, there are men who are emotionally and mentally abusive to women, and that is just as damaging. Being a “real man” does not mean “controlling a woman”, it means “protecting her well being”, not that she can’t protect herself though. Kanye West has commented on how significant Rihanna is to our culture, and she has been nicknamed “Princess Ri Ri” by the hip hop community, so when Chris Brown hit Rihanna, he did more then hit her, he attacked a community’s princess archetype. He degraded the anima, the vessel of light, the heroine. He needs to apologize to all women, because as a celebrity, he has a responsibility to know that his actions affect millions. Rihanna has handled this situation gracefully, and she is still a strong and great role model in my eyes. Every time I see and talk to her, she radiates light and strength, and even this dark incident will not dim her, for she will only rise above and empower women to not put up with disrespect. I say Rihanna’s own words back at her, from her hit single “Live Your Life”, she preaches, “You're gonna be a shining star, And then you'll see, you're gonna go far. Cause everyone knows who you are-are. So live your life, ay ay ay. Just live your life!” Please visit this site to know more about this important issue: http://www.domesticviolence.org/
Posted by Ashley and New York at 11:38 AM