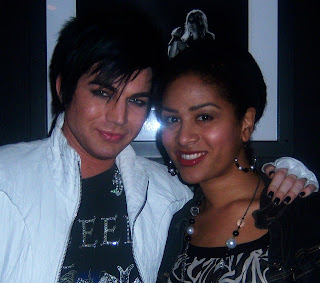 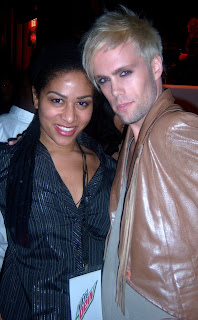 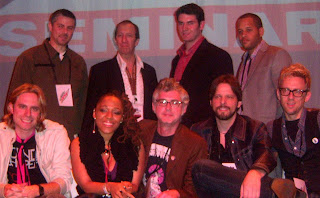 Two days after the Grammys in LA, the "New Music Seminar" conference happened in Hollywood. "Some music conferences are for insiders and others are filled with wannabe’s. The New Music Seminar was created by and for music’s revolutionaries." says author Martin Atkins. As the music industry rapidly changes, this conference is vital in educating music professionals in how to keep up with the changing times.

The night before the event an opening night party was held at the famous Key Club on the Sunset strip, where there was also a concert. "Semi Precious Weapons" (based out of NYC) was one of the bands who performed. I had never heard of them before, but I can see they are going to be big stars! They are opening up for Lady Gaga's concert, and in fact, Lady Gaga used to open up for them 5 years ago before she was known. Justin Tranter is the lead singer, and is very over the top and fun, as his band is uber glam-rock. He threw out a T shirt into the crowd and I was lucky enough to jump up like a basketball player and catch it! The shirt had one of the bands popular song titles, "I cant pay my rent, but I'm fucking gorgeous!" That's so struggling artist! :) I was happy to meet American Idol's Adam Lambert at the concert, he's such a rock glam guy like Justin Tranter .

The next day was the day long seminar at the Henry Fonda Theatre. Music execs, artists, experts, etc flew in from all around the world to speak on panels, and learn from the workshops, and it was a very educational and inspirational event. There was also a $25,000 new artist competition, where 3 bands competed, and the audience voted for the winner. The event ended with a cocktail networking reception.

The event keynote speaker was music industry success Tom Silverman (CEO & founder of Tommy Boy records, and one of the founders of the conference). He said, ""Context trumps content every time. People search for meaning."

For more information about this event, which is held multiple times annually in different states around the country, please visit http://www.newmusicseminar.biz