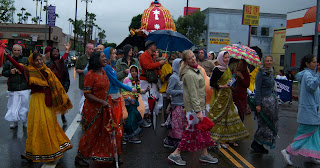 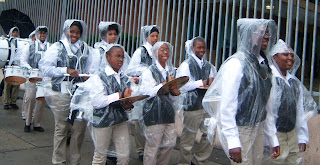 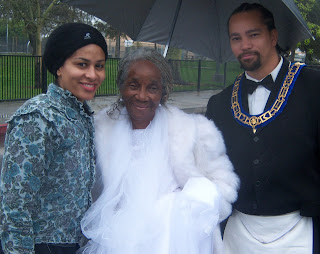 I had the rejuvenating joy of attending the Martin Luther King Day parade this weekend. I wanted to go because this is such a special time for the African American community, as Obama is the first president, our country is helping Haiti and more and more people are demanding that Mother Africa be protected from all the outside attackers.

I had been partying until 5 in the morning after The Golden Globes, and after I came home, I was only able to get 1 hour of sleep before my alarm went off. I turned off the alarm and thought I was too tired to go to the parade, but then I thought of all my friends who I wanted to see, and why it was especially important this year to show our pride in our communities progress, and I somehow found the energy (and coffee) to get up and get ready.

It was great to see activist friends of mine I had seen in a while, since I moved to New York last year, and I made a lot of new friends!

Halfway during the march it started to rain, and my shoes became buckets of water! I became drenched, but kept on marching. Our ancestors had to ednure so much more then walking in the rain.

I wonder how Martin Luther King would feel today if he saw how many human beings in America are still being stripped of their civil rights, like LGBT people, and undocumented workers, and women's right to choose, etc.. We still have so much work to do!
Posted by Ashley and New York at 1:46 PM