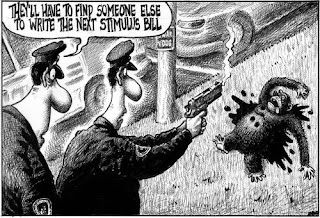 Two days ago Sandra Guzman filed a lawsuit against New York Post editor Col Allan, accusing him (and others at The Post)of being sexist, racist and sexually harassing. A racist cartoon was drawn portraying President Obama as a monkey, and after Guzman complained about this offensive image, she was fired (which was a month ago). Now she is taking a stand and calling out some of her former employers for causing a hostile and uncomfortable work environment. One may ask "Why didn't she press charges before she was fired?" Well I'm sure it's not a simple answer. One answer could be is that she didn't want to be blacklisted in her professional industry as "a woman not to hire"- meaning that many women do not come forward with complaints because they feel it will jeopardize their future and security. I remember years ago when I was working for a corporation, and the person who hired me expressed that he "liked me" and wanted to go on a date". I just let it go and ignored the situation. Then when the company had to make layoffs, I didn't make the cut. I'm sure if I had "complied" with my superior's request for romantic attention, my job would have been safe. I felt that if I had pressed charges, that companies in the future would have been cautious of hiring me once they found out I made a complaint (which they could see as a "risk"- even though the true "risk" was the man who chose to break company policy by pursuing a coworker romantically). Now I wish I had told HR, because no woman should have to be harassed at work. I feel grateful now though that I have more control over my work situation, and do not have to be in a hierarchy of a company where I can't control my work environment. I'm happy that Sandra is stepping up, and I hope justice is served. I also find it appalling that the cartoon that was in the New York Post is referring to Obama as a "monkey". What I've learned about racism in my 2o's is that racist people generally do not hate "other people/races", they actually "hate themselves", and expressing racist rants is just their sick way of dealing with their own feelings of insecurities and inadequateness. To read more about this lawsuit, check out this link http://gawker.com/5401475/the-new-york-post-is-a-hellish-cauldron-of-racism-sexism-and-white-rage-lawsuit
Posted by Ashley and New York at 11:52 AM