Now That Trayvon Martin's Murderer Is Jailed, We Still Need To Keep This Momentum Up & Demand Justice For ALL People of Color In the U.S.! 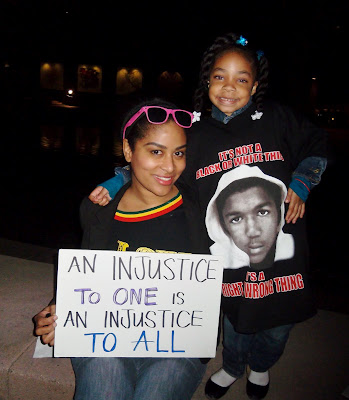 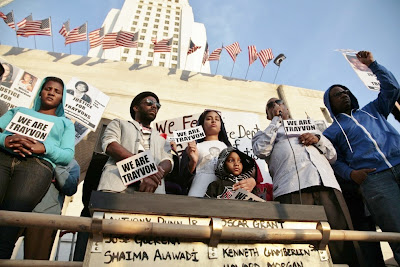 The Washington Post published this photo of me and other activists on Tuesday from the April 9th march in downtown L.A. which demanded Zimmerman's arrest


The good people’s prayers and demands have been answered! Moving forward, now that 17-yearold Trayvon Martin’s murderer, George Zimmerman, is finally in custody and being charged with murder, where do the millions who cried out for justice go from here? How can the millions who marched, rallied, signed petitions, made Justice themed artwork, wrote articles & blogs, prayed, called or wrote their elected officials, utilized online social networking, started or joined causes such as Million Hoodie March , Occupy, Justice For Trayvon Martin and many other movements, and cried, chanted and shouted for Zimmerman’s arrest turn this case into something bigger than one man’s arrest?

We all know this is not an isolated incident. What’s the bigger picture? Shouldn’t we reach higher?

Of course it will be a lengthy trial, so we will have a lot of times on our hands. Why not make the most productive use of that time? (more after the jump)

Take action! Stay involved! Join one of the many groups who helped organize rallies and marches. Join a local social justice group. Register to vote! Volunteer. Invite friends. Let’s turn this tragedy into a powerfully positive force that we use to accomplish our dreams of a just and peaceful society.

In spite of the condemning evidence against Zimmerman, he was initially allowed to go free. Likewise, many crimes by those in power against minorities, women and the poor go unchecked all the time! Could this case be a starting to point to reform the police departments and judicial systems that time and time against fail the Black, Brown and economically oppressed communities in this country? Many Americans know that this case can be bigger than just Trayvon Martin if the We the People make it so. With all the unrest going on in this country and in the world, this is a prime time to storm the gates and demand a real democracy!

This mobilization is about rightness for ALL the Black and Brown youth around the country who have been in the past, currently are and will continue to be victims of corrupt law enforcement and unjust court systems! We are tired of our young Black and Brown brothers being illegally ‘stop & frisked’ without cause or warrants by racist and classist police officers. We are appalled at the neo-slavery that is enforced through the prison industrial complex in the country that unfairly imprisons Black and Brown men for lengthy periods of times, making the corporations who profit off their labor rich. We are disgusted by the GOP’s war on women’s rights and healthcare, which disproportionally affects women of color and the poor. We can’t believe our ears at the racist propaganda that screams at us from far right media outlets and pundits. We cry out against the laws in Arizona that make racial profiling legal, which obviously target at our Brown brothers and sisters and mirror the Jim Crow days. We protest the exploitment, scapegoating and mistreatment of our undocumented Brown brothers and sisters. Sadly, the list goes on of the systematic oppression of people of color in the “modern” country.

It’s urgent that this momentum does not slow down, but become a massive tidal wave that smashes the system that divides people in this country instead of uniting us together.

It’s important that those fighting for racial social justice become aware and fight against the alarming and growing war against women that has been waged by the Republican Party! 50% of people of color are women, so the GOP’s war on women is also a racial justice issue, especially since women of color will suffer the worst if this current assault on women’s healthcare, contraception rights, well-being and self-esteem waged by the affluent white men who run the Republican Party succeeds. All social justice movements really do need to come together ASAP!

Again, take action! Stay involved! Join one of the many groups who helped organize rallies and marches. Start your own! Join a local and/or national social justice group. Register to vote! Volunteer! Invite friends. Paint a picture of what justice means to you! Write a poem, perform spoken word! Get the message out! Let’s turn this tragedy into a powerfully positive force that we harness to accomplish our dreams of a just and peaceful society.

2012 is not the end of the world as the Mayan calendar suggests, it’s the BEGINNING of a new dawn, the people’s dawn! Haven’t you noticed that people all around the world are rising up against tyranny and economic injustice all at the same time? There is also this global human consciousness awakening that many feel happening, a universal enlightenment. So much promise and positive energy is here and awaits us. And of course, right here and NOW is the time to take a stand!

A favorite chant of mine from the Trayvon march: 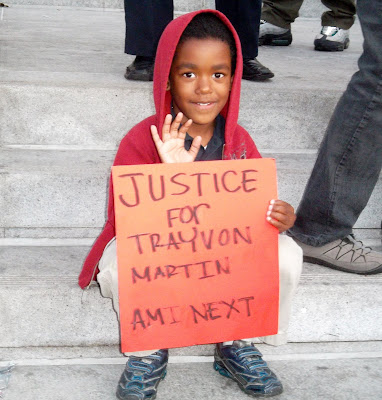 I met the cutest little trooper for justice on the steps of L.A. City Hall on March 26th following the Trayvon Martin march

Posted by Ashley and New York at 4:39 PM