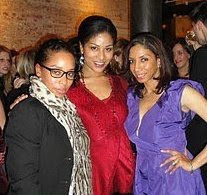 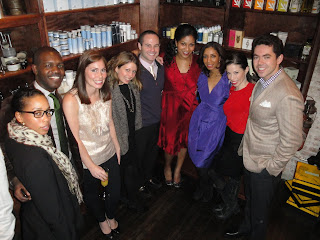 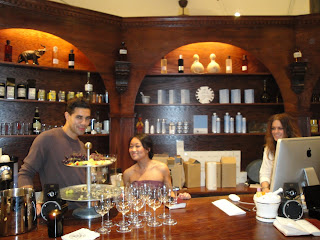 Employees of "MiN" (location of party)

Tonight I was invited to a holiday party in SoHo. It was a warm gathering filled with a lot of holiday spirited professionals and artists, which was hosted by the Young Patrons of Lincoln Center (YPLC). Festive libations, snacks and desserts were served, with merry music and conversation. It was held at the MiN New York location.

Dawne Marie Grannum,a YPLC Steering Committe member, reflects on tonight's event, "A great time was had tonight at the YPLC Holiday party! The event was well attended and the crowd was a nice mix of YPLC members who had been with the organization for years as well as members who had recently joined; in fact I met someone who had just signed up the day before. There was merriment everywhere and we look forward to having more of these social gatherings in the future! Hope you can join us at the next one."

Caroline Hamilton, Manager of Young Patrons of Lincoln Center, tells Ashley and New York, "Last year Lincoln Center celebrated its 50th Anniversary, and YPLC represents a new generation of arts enthusiasts that will support this institution for the next 50 years. Our members are interested in everything from Opera to Hip Hop to Fashion -- and YPLC provides a forum where they can learn about every art form on this campus. Many YPLC members have become leaders at Lincoln Center, fundraising for major galas, underwriting the cost of educational series, and serving on community outreach initiatives in the Lincoln Center neighborhood."
Posted by Ashley and New York at 4:36 PM