Serena Williams Strikes Back Against Sexism And Inaccurate Judges 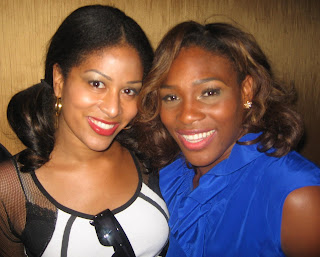 I am so proud of Serena Williams for continuing to be a great role model to women and challenging the unfair system that has admitted to inaccurately judging Serena's performance (therefore robbing her of her earned title. She also addresses the sexism involved in sports. She wrote on her blog a few days ago a letter explaining her point of view about the record breaking $92,000 fine she has been stamped with. Many times when a man uses inappropriate language during a sport, he is called "passionate" or ""competitive" or any other positive adjective. For example, John McEnroe & Jimmy Conners are 2 legends in the tennis world, and had outburst 20 times more repetitive and foul mouthed then Serena, but they were not vilified as much as Serena, and were never fined more then 10K. Yet on the other hand, when a woman is aggressive, she is called "a bitch" or "too competitive" or many other negative titles. I felt a pain when Serena was again ROBBED of her title. What's going on here? I'm not even a professional line caller, and I could see how outrageous and wrong many calls against Serena have been. Its only natural Serena snapped! Though she is a super star athlete, guess what: She is also a human being! She actually has feelings, and a heart! She has worked unusually hard all her life, and sacrificed so much, only to have the title she earned fair and square taken from her from tainted judges, and more then once! I'm thrilled that Serena did not let the association get away with out her calling out the truth, since their referees seem unable to consistently do so. Please read Serena's heart felt letter: http://horiwood.com/2009/12/09/serena-williams-reply-to-her-92000-fine/
Posted by Ashley and New York at 2:54 PM