BREAKING NEWS: Horse Lovers Horrified That Walmart Has Been Including Slaughtered Horses In Its Beef Products Without Informing Consumers Beforehand. Horses Are Intelligent & Sacred Beings Meant to Be Friends With Humans, Not Dinner! 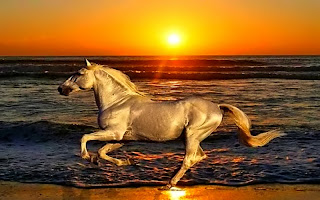 
LONDON, Feb 14 (Reuters) - Wal-Mart Stores Inc's British supermarket arm, Asda, said on Thursday it had discovered horse DNA in its beef bolognese sauce and was withdrawing that product and three others from its stores.

"We have a preliminary test result that suggests the presence of horse DNA in our 500g Beef Bolognese sauce. As you'd expect, we have withdrawn this product from our shelves," Asda spokeswoman Jo Newbould said. Asda has about 550 shops across the UK.

And yet another reason to be disgusted by Walmart’s lack of morale. I and many others would never voluntarily eat horses; they are intelligent and sacred beings meant to be friends with humans, not be served as their dinner.
When I was sent to a boarding school for three years during junior high I spent lots of time daily with horses, they were like the only family I had at that time and were so patient, gentle and intuitive with me while I learned how to ride well. After a while I became very close to one horse in particular named Constance who eventually gave birth to an adorable little boy. Too soon after he was born our school’s horse care provider sold him and I was devastated not just because I adored the lively foal, but because I knew in my heart that he and his mother were not ready to forcibly say goodbye to each other. The poor baby was crying and bucking when they took him away from us. It's still a painful memory.
Walmart’s latest scandal is just another reason for me to go back to being a pescetarian.