One of my favorite opera stars, Alyson Cambridge, graced the event and we had a great conversation about issues we both were familiar with, such as us both being biracial and multi-cultural. She's as intelligent as she is talented.

"I have always been an admirer of J. Mendel gowns and was thrilled to be invited and attend this evening's event. As an opera singer and never at a loss for events, concerts, or occasions to wear beautiful clothes, I have come to J. Mendel for some of my most favorite gowns! One of my best memories was wearing a J. Mendel canary yellow, tulip-like, plush gown I wore from the 2011 spring collection for two concerts -- in San Francisco and Beijing. When I walked onstage, the gasp from the audience was audible! As a performer, you want to come to the stage not only with your voice and beautiful music, but also with an unforgettable and powerful presence that the audience will remember and cherish as part of the experience. Gilles' gowns are so elegantly impactful -- stunning in their structure, design, fabrication, color, and pure 'wow' factor." 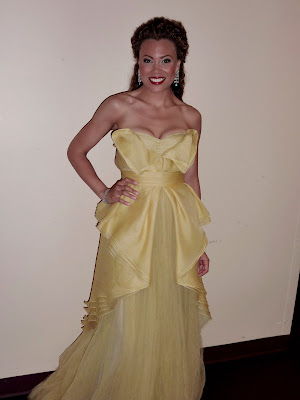 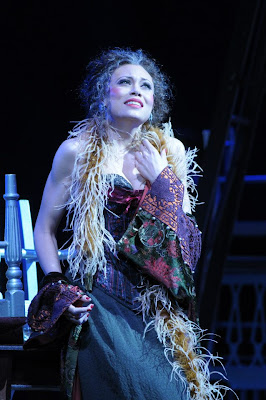 Alyson Cambridge as 'Julie' in Show Boat at Lyric Opera of Chicago, 2012

Alyson Cambridge has quite a year ahead in 2013!
In 2013 Cambridge returns to Washington National Opera as 'Julie' in Showboat, will be a soloist for the Mormon Tabernacle Choir for a national TV and radio broadcast and debuts the role of ‘Vi’ in Gershawn’s “jazz-opera” Blue Monday at New York City’s legendary Cotton Club. She also records her second CD featuring jazz and crossover favorites from the American Songbook, will embark on a multi-city solo concert tour in China and will begin a run of engagements of her celebrated role of 'Mimi' in La boheme in London, San Diego, Washington and beyond.

For Alyson’s schedule and further announcments, and as they are allowed to be made public, please visit her website for details:  www.AlysonCambridge.com 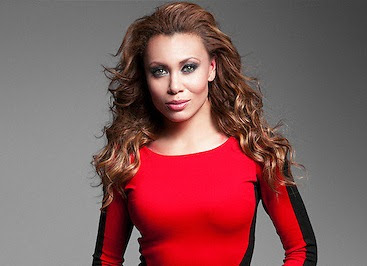 Posted by Ashley and New York at 1:21 PM