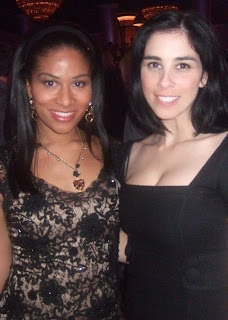 I am so bummed to hear that funny girl Sarah Silverman's show has now been cancelled. After 3 seasons, Comedy Central has said goodbye. In the male dominated world of comedy, Silverman broke through and entertained millions. Though I will miss her show, I'm sure she will find other opportunities.

I first met Sarah a few years ago at Clive Davis' Pre Grammy Celebration at The Beverly Hills Hilton. At the time I was involved in entertainment public relations, and became friendly with numerous celebrities. Actresses Nia Long and Sana Lathan (love them both!) had invited me to sit at their table for dinner. Sarah and her then boyfriend Jimmy Fallen were sitting at the same table! I would see and chat with her at other events after that too. My friend Hannah invited me to a LAGLC gala in which Hannah was receiving an award. I was happy to see Sarah was donating to that charity, and she performed stand up. She had the whole crowd laughing out of our seats!
Her character is witty, spunky and tells it how it is- she doesn't sugar coat.

I have never been a fan of how unfair the comedy world is to female comedians. My theory is that the men who run the comedy circuits don’t like to hear smart women bust their chops, so they keep the women representation to a minimum. Anyways, Sarah is an authentic talent, and she will blessed with other projects I'm sure. 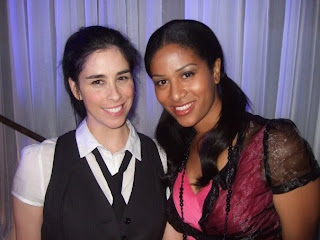 Posted by Ashley and New York at 5:50 AM